When it comes time to transfer 8mm film to DVD in San Diego, you may be wondering just how it’s done, and what the best quality transfer is. The type of 8mm film transfer service that is performed on your footage can make a world of difference in the end. It’s best to your own research to determine exactly what you want to get out of your film transfer, whether it be quality or cost. Many of the companies out there today will use cheaper, lower-quality methods such as a real-time transfer. 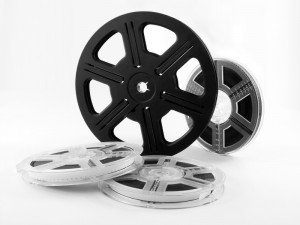 Film is naturally around 15-18fps, and when it’s telecined to 30fps video, you will get some blending of frames, which often creates a fuzzy or soft look to the picture when watching in real time. Many times with older film, you’ll notice that there are much more color problems with a real time transfer as opposed to a frame-by-frame transfer due to the way film naturally shifts in color over time. Also with this method, your frames will often be cropped off so you lose a lot of image data, and you’ll also notice some flickering when watching due to the frames being captured in real time.

The Premium frame-by-frame film transfer is by far the highest quality film transfer available today, as each full frame of film is individually transferred one after another.

Our retrofitted projector is one of the few in the world that has a manually adjustable brightness control which can make under or overexposed scenes look much better. We use this machine for both Film to DVD San Diego, and Film to DVD Orange County orders. The transfer technician will watch your film on a standard monitor as well as a waveform monitor and adjust the back-light brightness accordingly. This type of brightness adjustment is a custom fitted attachment, and is not available at most other companies. With a frame-by-frame transfer, you are then easily able to manipulate the film once it’s been captured to your computer.

Check below to find out more information about our great Film to DVD services: