If you have relatives overseas, or have ever received video tapes from Europe or Asia, you may have found that the tapes did not play correctly in your home VCR. This is caused by a significant difference in broadcasting formats between NTSC and PAL. Here in America, we use NTSC, which is short for National Television Standards Committee. Other regions, such as Europe, Australia, and some of Asia use a format called PAL, or phase alternating line. Typically, you’d notice black and white bars and fuzz mixed with garbled audio when trying to play a PAL tape on a NTSC VCR and at first glance you man even mistake it for VHS repair job while thinking it’s tape damage. 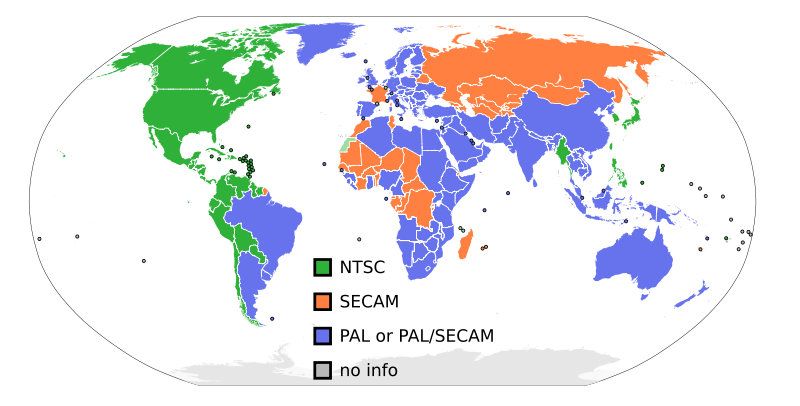 If you have ever traveled to another region like Europe, you may have noticed that some of their equipment is a little different than ours here in America. In Europe and other countries, they use a 50hz power supply. Because of this, on PAL systems the video signal is sent out at 50 fields per second, or 25 alternating lines. Doing the math, you can easily figure out that PAL video runs at 25 frames per second. In America, we use a 60hz power supply which allows the image to be sent at 30 alternating lines. This allows NTSC video to run at right around 30 frames per second.

This is the reason that converting PAL to NTSC and vice versa is a little tricky, and makes the video seem a little funny when completed. When converting from PAL to NTSC, 5 frames must be inserted into the footage to compensate for the 5 missing frames per second that the PAL format lacks. When these frames are artificially added to the video, it can result in the video looking jerky and create a slight speed increase in the video playback. The opposite is true if converting an NTSC video to a PAL. Instead of adding 5 frames, you will actually be removing 5 frames from the video, which in the end makes the video appear unnaturally slow.

In addition to the framerate difference, there is also a difference in the video resolution. NTSC displays 525 lines, while PAL actually displays 625. With more lines, you get more video information on the screen which then equates to better overall picture quality. When an NTSC video tape is converted to PAL, often times black bars are sometimes used to compensate for the smaller screen aspect.