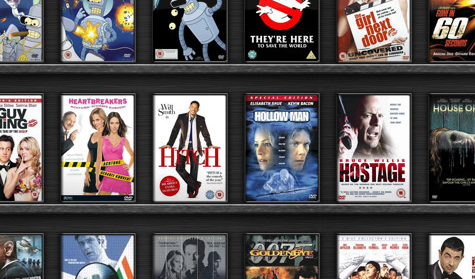 The story of the effect of the DVD on the film industry starts with the introduction of the VHS tape in the early 1980s. Home video changed how the film industry worked, by providing people a way to enjoy movies from the comfort of their own homes. VHS tapes were pretty expensive when the first came out, as the heads of the major studios were worried about profit loss. When they realized that they weren’t really losing any profits, it paved the way to the low priced DVDs we know of today.

One of the most attractive features of the DVD over conventional video tapes was the amount of recording space available. A typical VHS recording would run about 400mb, while a commercial DVD can hold up to 15 times that amount. This has allowed studios to insert graphical menus, additional commentary and audio tracks, and of course — special features and behind the scenes looks. Special features are also something that cannot be added through a standard VHS to DVD transfer.

8: Rise of the Popular Auteur

D.W. Griffith, Howard Hawks, Alfred Hitchcock and Orson Welles are a few examples of early auteurs. Martin Scorsese, Francis Ford Coppola, Woody Allen, Roman Polanski and Stephen Spielberg became popular in the ’60s and ’70s, along with James Cameron and Ron Howard in the late ’70s. Digital video has given people a much easier chance to get ahold of the unique films produced by these directors.

While new and revised releases of older films have always been a way for the industry and filmmakers to make new profits and show improved versions of their films, it’s only in the DVD and digital age that multiple versions and re-releases of films are possible on a large scale. Movie companies release film to DVD in several different editions. Improvements in special-effects technology, for example, led to the mid-’90s theatrical release of the classic “Star Wars” trilogy, and subsequent releases.

Of course, even when the selling point for a given film is something other than the director or creative team behind the movie, we still show an interest in learning more about the process of making the movie. This is enjoyable for, and now expected by, consumers, but it also makes sense to the studios, who like to give us as much incentive as possible to buy the DVD by loading it with things you can’t find anywhere else.

While there have always been sequels to mega-films, particularly beginning with the age of the blockbuster in the ’70s, the DVD has given all kinds of new dimensions to the idea of the franchise. Before home video, a film might produce a sequel if it was particularly successful at the box office — but with new films coming out weekly, a movie might not stay in theaters long enough to justify a second production.

As DVD production became cheaper and cheaper, more and more movies from the past have begun to surface as digital copies. Some studios dedicate their time to restoring old classics, and cult films to digital formats such as The Criterion Collection. The Criterion series is noted for helping to standardize the letterbox format for home video, bonus features, and special editions. Criterion is also known for taking great lengths to restore and clean all films released on their label. In addition, full seasons of TV shows have begun to pop up as DVD box sets, full with bonus features that fans can purchase.

Because sale of a DVD means sale of the music contained on that DVD, films (and television shows) must contend with music and soundtrack licensing, as well as publishing rights and other artist revenues. Because of the importance of music and how it relates to the movie, show, or story, many companies include DVD and online streaming clauses

DVD technology has also responded to our expanding entertainment universe. Where once films stood or fell based on their box office standings, now every movie is an opportunity to develop a world that takes advantage of both online and offline technologies. While classic merchandising products like toys and novelizations still make a lot of money for movie producers, the possibility of taking that experience online means the only limit is the creativity of the franchise team.

Of course, the digital format has its problems. DVDs can be hacked easily, copied and shared, and even the classic hand-filmed theater bootleg is much easier to sell or share now that digital networks are the norm. Peer-to-peer sharing, bit torrents and the rest of the modern pirate’s toolkit mean studios spend a great deal of money tracking down offenders and making trouble for them.