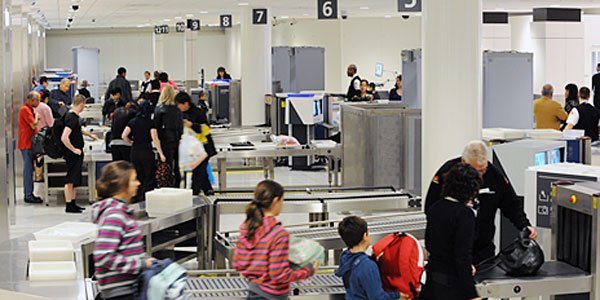 When travelling with video tapes, audio tapes, negatives or film, it’s important to stick to a few guidelines to ensure the safe passage of your media. In the age of heightened security and scanners, magnetic recorded material can be at risk of being exposed to damaging magnetic fields and radiation which could render them useless.

It’s been shown that traditionally, x-ray machines at the airport check-in have very little to no effect on video tapes but x-ray exposure has been shown to cause undeveloped film and negatives to fog, so make sure you keep those separate and request them to be hand searched. One major video tape maker, Sony, was concerned about the newer detection devices such as the explosive detection system (EDS) and their effect on recorded media. In the airport tested, they found that the EDS had no detrimental effect on the video tape. However, airports around the world exhibit a wide variation in the design of security x-ray and other scanning equipment which make it impossible to determine what effect, if any, these new scanners might have on your magnetic tape recordings. If you plan to travel with recorded media and will be passing by these new X-Ray and explosive detection machines, as a precaution it’s recommended that you consider the following points: If possible, make a back-up copy before you embark on your travels. Try converting the video to DVD, or film transfer to DVD before travelling. Carry-on your valuable recordings and submit them for hand inspection at security checks. Carry along a sample tape that can be put through the normal inspection, if necessary. Allow yourself some extra time in the event that the search taking longer or security has questions for you. If it is unavoidable for your tape to be subjected to x-ray security, try to avoid multiple passes.

“I had a customer that was bringing back several VHS tapes to the US to have them transferred. Unfortunately, these tapes were coming from overseas in their checked baggage. The bags went through one of the luggage metal detectors and were erased. This is a common occurance with older formats of tapes such as VHS and older 8mm, and even audio tapes. Newer tapes are much more resistant to this problem. If a customer is shipping an older tape to you, or bringing them through an airport, be sure to ask them to package the tapes separate from other luggage and write on the package Recorded Media – DO NOT Scan – Hand Inspect ONLY.” -Steve Hoemke Denver store manager