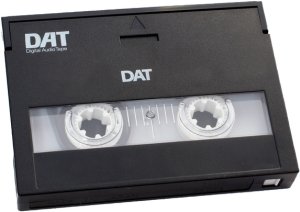 DAT tapes are often confused with standard analog audio cassettes, mostly due in part because they look the same, but that’s where most of the similarities end.

Most of us are pretty familiar with the old audio cassette, as they were a large part of our lives growing up in the 1970’s through the 90’s. These cassettes were recorded in analog, which is a recording method that stores signals as a long continuous wave on the media. In the case of the audio cassette, the wave is the fluctuation in the field strength of a magnetic recording.

Some audiophiles argue that because analog recording methods are continuous, they are better at capturing a true representation of sound because digital recordings can miss subtle nuances. However, as digital recording processes continually improve, digital devices can use higher sampling rates with greater precision. Although the signal still isn’t continuous, the high sampling rate can create a sound very similar to the original source.

Can Digital Recordings Sound as Good as Analog?

Early digital recordings often sacrificed sound quality, or fidelity, in favor of reliability. One of the main drawbacks of an analog format is that analog media tends to physically wear down over time. Vinyl albums can warp or get scratched, which will inevitably have an impact sound quality. Magnetic tape eventually wears out and is vulnerable to magnets, which can erase or destroy information stored on the tape. Digital media like compact discs can reproduce sound indefinitely, as long as the disc is taken care of.

However, due to the way it’s recorded, one of the benefits of analog recordings is that if the tape is partially damaged, you’d likely still be able to salvage much of the undamaged and even parts of the damaged recording with proper skill and care, while If a digital recording suffers even a small scratch, you could lose the entirety of the sound for that damaged portion.