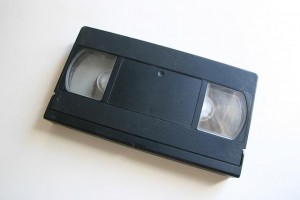 We all had them at one point, but what are these things, and where did they come from?

Video Home System (VHS) tape and the VHS recorder were developed by a team at the Victor Company of Japan (JVC) in 1976. Videotape is a linear system of storing information. VHS originally stood for Vertical Helical Scan, a reference to the recording system used. Later in 1976, the VHS format was introduced by JVC and Panasonic.

Although its primary rival was Sony’s Betamax, there was a brief period of time when other companies such as Philips, MCA, and RCA produced different tape formats and disc systems. All of these systems failed to capture the market and never became popular. VHS won out due to its many advantages including, the ability to rewind and fast forward at quicker rate, the unthreading system, and more importantly its longer recording time. VHS videocassettes peaked with the sale of The Lion King, which sold more than 30 million copies in the U.S. alone. The VHS format continued to thrive for two decades until the invention of the DVD.

By 2000, DVD had become a much more popular and efficient tape format. DVD sales rapidly surpassed VHS in the United States and from the time DVD came had reached the end of its time on the scene, VHS tape experienced a rapid decline. The last VHS tape that was mass-produced was The History of Violence. By 2005, the use of VHS tape for feature films had stopped. VHS videocassettes had been discontinued for release to the public. VHS had a long and prosperous run. By the end of 2005, there were still an estimated 90 million machines that played VHS tape and were still functioning. VHS tape had a long career and its impact will continue to be felt as the next generation of hi-def formats takes its place in recording world.

Don’t forget to get your old VHS to DVD in San Diego or Orange County today!