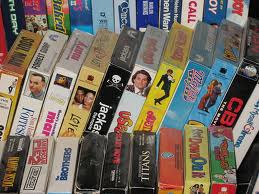 As demonstrated by two documentaries screening in L.A. this week, obsolescence need not imply irrelevance. Monday night at Cinefamily, Josh Johnson’s Rewind This! provided a people’s history of VHS; tomorrow night at the Nerdist Showroom and then again at the Egyptian on Friday, Dan Kinem and Levi Peretic’s Adjust Your Tracking: The Untold Story of the VHS Collector places a spotlight on those obsessed with what one devotee affectionately refers to as “the most maligned format since the eight-track.”

Both films immediately distinguish themselves by their obvious affection for not only VHS itself but, by extension, their die-hard interviewees: There’s nary a trace of ironic detachment or condescension here, which is exceedingly rare for any depiction of geek culture.

Rewind This! (which is available on iTunes as of August 27) is the more polished and comprehensive of the two, but the DIY, shot-on-video aesthetic of AYT is put together with the sort of rough-around-the-edges care that merges form and content as only a film of this sort could. Kinem and Peretic have taken great pains to emphasize that this is endeavor is for collectors, by collectors, making the proceedings feel especially personal and authentic.

Just as important, they don’t hinge their arguments solely around nostalgia. More than just retrophiles or stubborn contrarians, AYT’s talking heads — many of whom have thousands upon thousands of tapes in their personal collections — offer a ground-level perspective on how VHS was the first format to “take cinema out of the movie theater” and democratize the very act of watching movies. At the video store, several point out, it didn’t matter whether a film cost $100 million to make and featured the biggest movie stars in the world; what mattered was the cover art, which continues to influence many a buying decision today.

Read the rest of the story over at La Weekly: https://blogs.laweekly.com/arts/2013/08/vhs_revival_rewind_this.php

Previous PostUsing Digital Media to Enhance Your WeddingNext PostIs It Better to Scan Photos or Negatives? Is there a Difference?