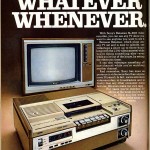 If you were around during the early to mid-80’s, you may remember the battle between Betamax vs. VHS. During a brief window when these tape formats were first released, consumers had the choice of either purchasing a new Betamax machine from Sony, or a VHS player, or VCR, from the JVC company. Due to a combination of marketing and economical factors, the eventual victor was the VHS tape. Not long after, Betamax tapes began to be phased out of production, leaving the many consumers who had purchased a Betamax deck to fend for themselves. Many Betamax customers ended up losing entire video collections because as time went on, it began to be increasingly hard to find a working, reliable Betamax deck, let alone a place to convert Betamax to another format!

Check out some of the marketing material that was going around during the great video tape war:

Fast forward a couple of decades later, and people nowadays often scratch their head when you mention a Betamax tape, either because they weren’t around for them, or simply forgot. The people that DO remember them mostly think they aren’t even watchable today. Well, it turns out that most Beta tapes, if they survived this long in ideal storage conditions, are usually able to still be played, and therefor be transferred to DVD. If you’re curious, bring the tape into a local DVD Your Memories store, and one of our video technicians can let you know if we can still transfer video from the tape! Even if it doesn’t play on the first try, we have the capabilities to repair Betamax tapes in order to get them working again for a Betamax to DVD transfer.

With the help of computers and other digital technology, we’re able to convert your Betamax to either DVD, Blu-ray or transfer them straight to you hard drive for editing purposes. Editing can be used to compile several tapes into one, or to splice together your favorite scenes. Just image seeing your 30 year old tapes appearing on Youtube! Come on in and relive the Betamax memories with our Betamax to DVD services:

Previous PostRecord Your Life Story to Create Your Own Living LegacyNext PostGUIDE: How to Transfer Your Audio Cassettes to CD or Mp3 Files