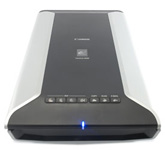 Both photo buffs and family archivists often turn to flatbed scanners to digitize photographs, slides and negatives. Many of the newer model photo scanners provide some helpful additional features such as the ability to scan non-print formats such as slides and negatives with or without the help of an adapter. Many of these scanners also include bundled photo editing software to help retouch scans and remove scratches. Here’s a short list of the 5 best we’ve seen from 2013, courtesy of pcmag.com