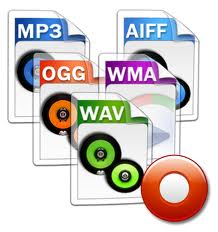 In the world of digital audio, there are many different types of audio files that can be created, all with different attributes. Understanding the differences between common audio formats can not only help you with future audio projects, but also better prepare you to archive and preserve your own audio, if you choose to do so. The first step to realizing what type of audio file you’re working with is to look at the file extension. The file extension is the short series of letters that follow the dot in a file name, such as JingleBells.mp3. This guide will cover some of the most common audio files that you might come across.

WAV audio is one of the oldest audio formats, and also one of the most recognizable. Many people instantly recognize .WAV files as sound files when seen on their computer. Microsoft has been using WAV since the early days of Windows as a format for raw and typically uncompressed audio. Most commonly, WAV files are uncompressed in the linear pulse code modulation (LPCM) format, which is also the same format that audio CDs use, which is why WAV files can be very easily used to create a playable audio CD. The main drawbacks of the WAV format are the relatively large file sizes, coupled with it’s inability to be any larger than 4gb in size due to its use of a 32-bit unsigned integer to record the file size header.

Despite it’s age, the WAV file remains one of the most versatile and widely used audio formats today.

Presently, the MP3 is arguably the most popular audio format out there. Heck, your grandparents have probably heard of the format. Nearly all downloadable music of today is in the MP3 format due to it’s incredible compression to quality ratios. MP3 files can be compressed to just 10% of the size of a standard WAV file, and sound nearly identical. This is generally the reason MP3 files have such a wide appeal — they pack serious sound quality in a small package, small enough to fit a wide variety of them on your PDA, cell phone or memory card with limited space.

The FLAC format is relatively new on the scene, but is rapidly becoming the go-to format for archivists, and audiophiles and enthusiasts due to it’s ability to deliver uncompressed audio in a smaller package than what you’d find in a WAV format. FLAC is really just a codec which allows digital audio to be losslessly compressed in a way that reduces file size, but without any information actually lost. Audio compressed with the FLAC algorithm can usually be reduced to around 50-60% of the original file size while maintaining identical sound quality. The only real drawback to FLAC currently is it’s lack of support in some devices, but this is likely to change as the format gains more popularity.

Vorbis is a free, open-source software project that produces an audio codec for a lossy audio format. Vorbis is most commonly used in conjunction with the Ogg container format, which is why you’ll often see it referred to as Ogg Vorbis. Vorbis was started in 1993, but really started intensive development in 1998, when licensing fees were announced for the MP3 format. The Vorbis format has proven popular among supporters of free software, but aside from that has gained little ground as far as popularity goes. It’s supported by most digital audio players, but users may find support lacking for external devices such as cellular phones or MP3 players.