Disc film is an old outdated Kodak format developed in 1982. Disc film came housed within a plastic cartridge which provided the user with a disc of 15 images, as negatives. The size of the negatives on the disc were 11x8mm exposures arranged around the outside of the disc, with the disc being rotated 24° between each image. The format, although convenient, did not prove to be particularly popular amongst consumers. This can be mainly attributed to the fact that the images were only 11x8mm, which resulted in sub-par quality on the resulting images. The film was intended to be printed with special 6-element lenses from Kodak, but many labs simply printed discs with standard 3-element lenses used for larger negative formats. The resulting prints often disappointed the consumer. The cameras did not last in the market very long, but the film stayed around quite a bit. In fact, it wasn’t discontinued by Kodak until 1999. Are you looking for a company to help you with disc film scanning? 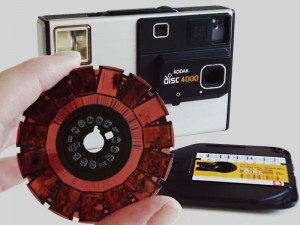 DVD Your Memories is one of the few places left in the country which provides disc scanning services. If you still have cartridges of disc film, bring them on by to convert them to lasting images on DVD or hard drive. We scan disc film in a unique way using our premium Nikon scanners to get the best image possible. We recommend a resolution of 4000dpi due to the fact that these negatives are much smaller than a standard 35mm negative you’re used to seeing.