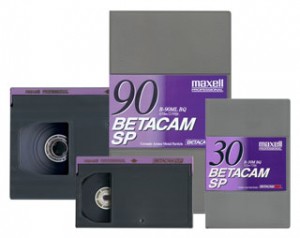 DVD Your Memories can transfer Betacam and Betacam SP to DVD or hard drive! Betacam tapes were developed by Sony, and first appeared on the market in 1982. Although Sony’s Betamax lost the consumer-format war to JVC’s VHS tape, a similar battle in the professional world was also fought with different results. During the 1980’s, they slowly started to take the place of 3/4″ U-Matic tapes in the broadcasting business. A few years after the original Betacam was introduced, it’s successor, the Betacam SP was developed, and slowly became the new standard. Today, companies use Digibeta, which is a digital tape format that was developed in the mid 90’s. 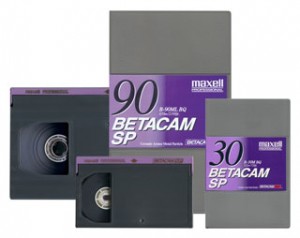 Betacam tapes come in two sizes, S and L. The camcorders are only able to load the S tapes, while the standalone video tape recorders could support both formats. Betacam to DVD transfers are increasing in popularity due partially to the fact that machines to play these tapes can be expensive and hard to come by. Although a more rare format, many television companies, independent film makers, or students with projects have footage recorded onto betacam tapes, with no way to view or extract the data on them. DVD Your Memories now makes it possible to view Betacam to DVD, or manipulate these tapes once again!

Do you have Betacam tapes with valuable footage still on them? Give us a call at 858-503-7965 for a free consultation!