For some, the actual differences between low-definition, standard definition, and high definition video can be a bit confusing. 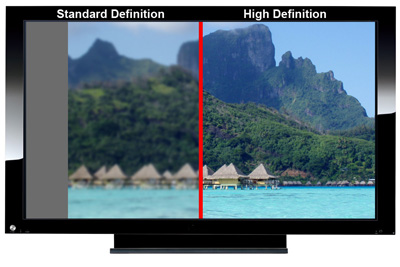 High Definition Video – This is the newest form of video that rose primarily at the advent of the HDTV (High Definition Television). Most of us are familiar with high-definition video, as it’s been heavily marketed the past few years by the film industry, home theatre companies, and cable companies. The most common resolutions of HD video are 1280×720 pixels (often referred to as 720p) and 1920×1080 pixels (often referred to as 1080i/1080p). 1080p is one of the highest resolutions that common displays can currently use, which makes for a much clearer and sharper image than video shot in standard definition.

Low Definition Video – This video type refers to television systems and videos that have a lower screen resolution than standard-definition. The term is usually used in reference to digital television, in particular when broadcasting at the same (or similar) resolution as low-definition analog TV systems. Mobile DTV systems usually transmit in low definition, as do all slow-scan TV systems.

You’d typically find most of your low-def programming from various internet sites, like Youtube, or videos downloaded on an iPod, or other portable device. The typical resolution of low-def video is 320×240 pixels.

Previous PostIs Technology Phasing Out The Old Joys?Next PostVideo Editing on a Desktop Computer vs a Laptop Computer, Which is Better?